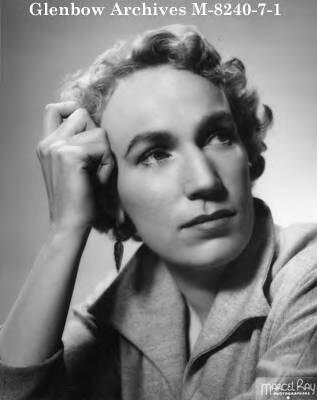 Gertrude E. "Trudy" Carlyle, ca. 1920-[after 1982], was a mezzo-soprano/contralto opera singer who grew up and spent most of her life in and near Calgary. She spent the 1940s and 1950s in Toronto where she sang with the Royal Conservatory Opera Company, the CBC Opera Company and the Dembeck String Quartet. She pursued her musical education with the Royal Conservatory, and attended many musical performances in both Toronto and New York. After retiring from singing and concert work, she moved to California and studied sociology in the Oakland/San Francisco area, ca. 1960s. She returned to Midnapore, Alberta in 1965 or 1966, and became assistant director for the Calgary Council of Community Services. Artists Marion and Jim Nicoll were close friends with whom she corresponded throughout her life.

The fonds consists of notes, sheet music, albums of her recordings, a kinescope of the opera "The Medium", promotional photographs, and programs. Includes letters, poems, and photographs from Marion and Jim Nicoll.