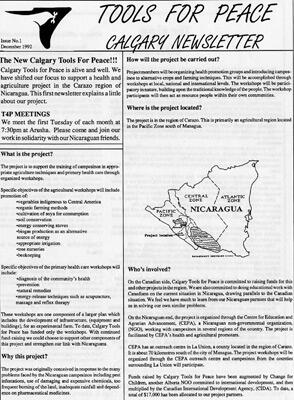 The Calgary Tools for Peace Working Group first met on April 10, 1984, and established an organization alternatively known as Tools for Peace or the Coalition for Aid to Nicaragua. Its purpose was to support economic development in Nicaragua, then governed by the Marxist Sandinista movement. It promoted the donation of farm machinery, medical supplies, and other capital equipment to Nicaragua, and organized educational activities. It was affiliated with the national Tools for Peace organization based in Vancouver, and with Oxfam Canada, whose status as charity permitted tax-deductible donations. It was incorporated in Alberta as Tools for Peace, Calgary - Aid to the Third World Association on March 15, 1988.