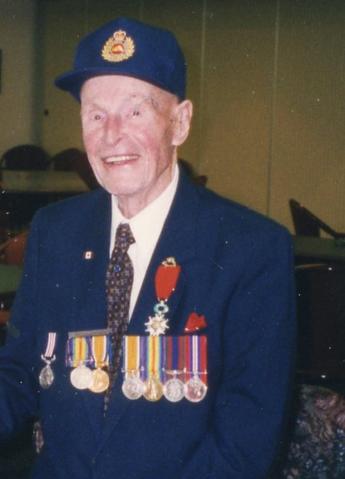 Tom Spear was born in Galt, Ontario on October 22, 1896. The son of a pioneer missionary who ministered in the Northwest Territories, Tom grew up in Innisfail, Alberta and Pipestone, Manitoba. He eventually moved to Emerson, Manitoba, where he got a job, in early 1915, as a telegrapher for the Canadian Pacific Railway. Tom enlisted in the Canadian Signal Company in Winnipeg on February 25, 1916, and arrived in England aboard the SS Baltea on May 25, 1916. He was sent to Shorncliffe as part of the 5th Canadian Division, where he received additional training in communications, in particular learning the Allies’ Continental Code which was slightly different from Morse Code. casualties. Tom arrived in France on April 11, 1918 and remained there until 1919. He worked in the Wireless Section in “interception” while in France. Despite having experienced close calls during shelling on the Arras front, he made it through the war unscathed. However, his 23 year old brother William D. Spear who also served in the Signals Unit was killed in action on September 27, 1918 during the Battle at Canal du Nord while he was repairing damaged lines. At the outbreak of the Second World War, Tom was once again recruited for signals. However, the technology had changed so much that he was redirected to other duties in the Air Training Command of the Royal Canadian Air Force. By the war’s end he was Acting Wing Commander. After the end of World War II, Tom returned to Winnipeg where he resumed his work with the CPR. One of Canada’s last surviving veterans of World War I, Tom died on September 28, 2000 at the age of 104 years.

Material was gathered by Tom Spears and his family during the course of his military activities both as a serving soldier and as a veteran. Donor is daughter of Tom Spears.