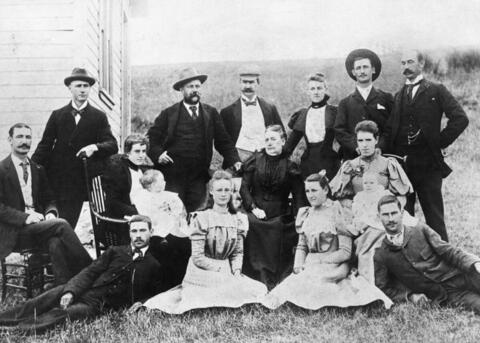 Thomas E. Riley, 1842-1909, was born in Derbyshire, England and came to Canada in 1862. He resided in Montreal, Quebec before coming to Calgary, Alberta in 1887. He was first engaged in the mercantile business before becoming a rancher. He and his sons owned land in the districts now known as Hillhurst and Hounsfield Heights in Calgary. Twice he was a candidate for the North-West Territories Legislature. He was married to Georgina Janes Hounsfield, 1843-1907, and they had ten children, Ezra, Thomas, Frank, Louise (Holmes), Arthur, Alfred, Harold, Maria (Halstead), Edmunde, and Emily (Edmonds).

The fonds consists of diaries pertaining to ranching and family business; miscellaneous personal papers; and photos of the Riley family and their farm.

The original diaries are restricted due to fragile conditions. Please use reference photocopies or the online version for research purposes.