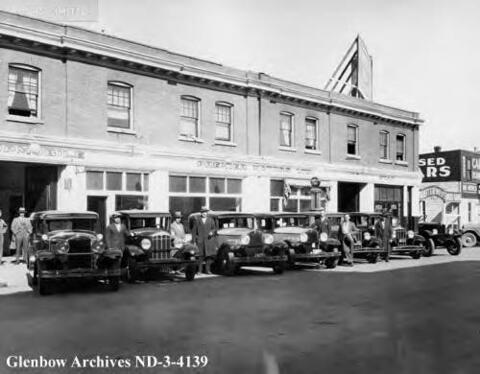 The de la Vergne Company Ltd. was incorporated in 1925 by Chester R. de la Vergne, 1876-1938, who was born in New York, USA, and had ranched in the Cochrane area from 1908 to 1919, when he moved to Calgary. The company was an agent for Studebaker cars and Stewart-Warner radios. In 1928 it acquired Premier Motors Ltd., a car dealership originally established in Calgary in 1923. Premier Motors had sales outlets in both Calgary and Edmonton, and was the Alberta distributor of Star, Durant, Flint and Studebaker cars, and Mason Road King trucks. The Edmonton branch closed in 1931 and the Calgary branch in 1933. De la Vergne moved back to the USA in 1934.

These records were salvaged from the Hollinsworth Building, owned by the Canadian Imperial Bank of Commerce, before the Bankers Hall project renovations were begun. De la Vergne's lawyer probably had an office in the building.

The fonds consists of alphabetical correspondence files about the car and radio businesses (1929-1930); and balance sheets, inventories, and ledgers for the Calgary and Edmonton branches of Premier Motors.

The Premier Motors balance sheets, inventories and ledgers are also available on microfilm.