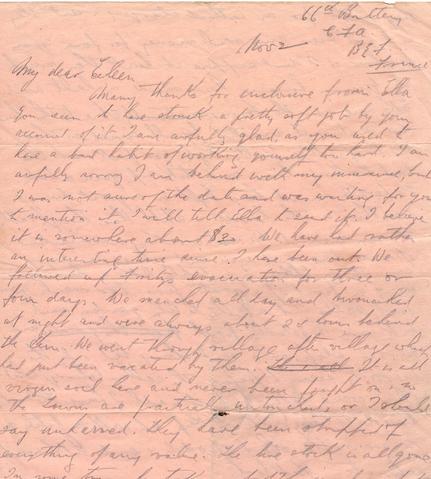 Terence William Hardy Thompson, 1894-1989, was born in Wimbledon, England and immigrated to Canada in 1911 to work for the Bank of Montreal. He was posted to Mount Forest and Windsor, Ontario; Montreal, Quebec; Calgary, Magrath, Edmonton, Killam, Cardston, Raymond, Myrnam, Mundare, Lacombe, Medicine Hat and Castor, Alberta; and Whitewood, Saskatchewan. Thompson served in the First World War in the 66th Battery, Canadian Field Artillery. After retiring in 1957 Thompson worked for the Edmonton Journal newspaper until about 1967 when he moved to Calgary, Alberta. Throughout his career Thompson contributed articles to magazines and newspapers commenting on current affairs and describing the life of a banker. In 1930 he married Antoinette Royal, 1897-1971, of Edmonton and they had two children, Suzanne (Shenher), 1935- , and Terence.

Material was kept by creator's family until time of donation.

Good. All letters unfolded and in mylar slips.

The digitized service records of Terence W.H. Thompson at Library and Archives Canada can be found here: http://central.bac-lac.gc.ca/.item/?op=pdf&app=CEF&id=B9658-S037