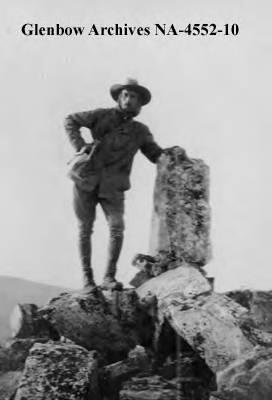 Theodore August Link, 1897-1980, was born in LaPorte, Indiana, USA and trained in geology at the University of Chicago. He came to Canada in 1919 as a geologist for Imperial Oil Ltd. at Norman Wells, NWT, worked for Tropical Oil Company, 1923-1926, and was in charge of western Canadian exploration for Imperial Oil, 1927-1942. Link was chief geologist of the Canol Project, 1942-1944, and assistant chief and chief geologist of Imperial Oil, 1944-1948. He subsequently established a consulting firm, Link, Downing and Cooke.

He was active in the Alberta Society of Petroleum Geologists (later renamed the Canadian Society of Petroleum Geologists). He was a member of numerous scientific organizations and was awarded the Barlow Medal in 1949 and Blaylock Medal in 1960. Link received an honorary doctorate from the University of Calgary in 1977 and was inducted into the Canadian Petroleum Hall of Fame in 2001. He married Florence Katherine "Kay" Ford in 1921 and they had five children, Elizabeth, Theodore William, 1929-2003, Jane (Lehman), Thomas and Robert.

Some of Ted Link’s glass lantern slides (ca. 1940s-1950s) of geology and petroleum-related illustrations are in the Canadian Society of Petroleum Geologists fonds at Glenbow (S-83 and S-92).