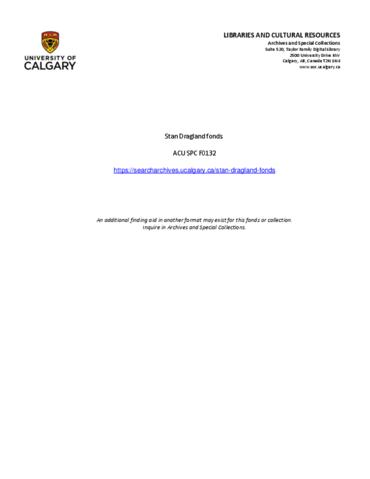 29.32 m of textual records and other material.

Stanley Louis Dragland, literary critic, editor, novelist, poet (b Calgary, AB 2 Dec 1942). Born and raised in Calgary, Stan Dragland studied at the University of Alberta, where he received a BA and MA. He earned a PhD from Queen's University in 1970. He has taught at the University of Alberta, The Grammar School, Sudbury, Suffolk (England), the University of Western Ontario and the Banff Centre Writing Studio. While a professor at the University of Western Ontario, Stan Dragland published a number of revealing critical studies that explore how the racial politics of Duncan Campbell SCOTT'S sympathetic "Indian poetry" relate to Scott's role as the deputy superintendent of the Department of Indian Affairs. Retired to St. John's, Nfld. in 1999, Stan Dragland's extensive work creating, publishing, critiquing and teaching Canadian writing has made him an influential figure in Canadian letters.