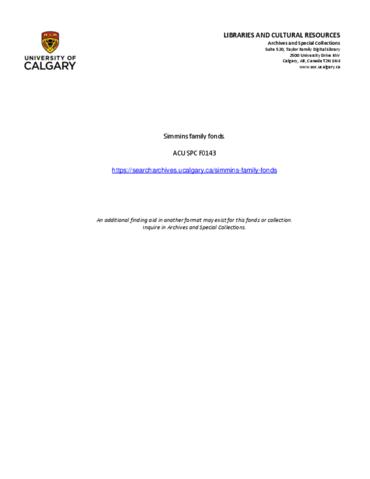 3.62 m of textual records and other material.

Richard Beaufort Simmins, 1924-1999, was born in Ottawa, Ontario, and educated in art history at the University of Toronto. Married Barbara Jeanette Atkinson, 1919-2000, in 1950. They had four children: Zoë, 1952-; Karen, 1954-1974; Geoffrey, 1956-; and Marjorie, 1959-. Barbara and Richard were divorced in 1968. Barbara returned to school and completed a Bachelor and Masters of Education at the University of British Columbia. She taught at Richmond Senior Secondary School, Richmond, British Columbia, from 1968 to 1986, where she developed an award winning Family Studies program. She also volunteered as a counselor at CHIMO, the Richmond Crisis Centre, and at Minoru Extended Care. Richard married Karin Weiss in 1980 and they had two daughters: Jessica, 1981-; and Fiona, 1985-. Zoë Landale is a poet, author and journalist who has published six books and numerous articles. Geoffrey Simmins is an art and architecture historian, published writer and professor at the University of Calgary. Marjorie Simmins is a freelance journalist and writer, married to writer "Silver" Donald Cameron. All family members are prolific letter-writers and journal-keepers. Other family members include Richard's parents Richard Godfrey Simmins (Nick) and Marjorie Mabel Beaufort Simmins (Minnie); his brother Godfrey Jermyn Philip Simmins (Red); and his sister Susette Simmins