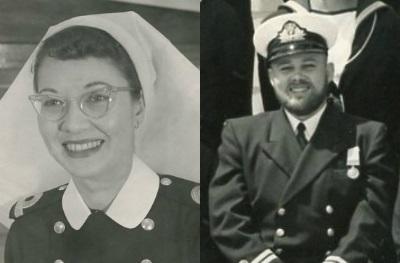 Mary Teresa Vera Murray (nee Imhoff) was born in New Carlisle in the Gaspe region of Quebec on February 2, 1928. Vera joined the Royal Canadian Navy in 1954 as a Registered Nurse where she met Sherman Murray. She served on the HMCS Shearwater and was promoted to Sub-Lieutenant in 1956. She and Sherman were married in 1960 and had 5 children. She died in Calgary on August 14, 2014.

Sherman Edwin was born in Goderich, Ontario in 1934. He joined the Royal Canadian Navy at the age of 17. He received his basic training as a seaman in Cornwallis. He served on the HMCS Cayuga during the Korean War. After his service in the Korean War, he became an RCN pilot and flew Banshees off of Canada’s last aircraft carrier, the Bonaventure. Later he served as an instructor at HMCS Shearwater. Following his military service, he settled in Calgary where he worked in the construction industry. He died in Calgary on August 9, 2016.