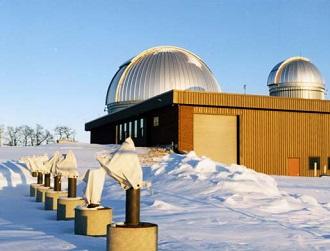 The impetus for the Rothney Astrophysical Observatory (RAO) was initiated by Mr. Alexander (Sandy) Rothney Cross in December 1970 when he offered to donate a quarter section of land near Priddis, Alberta to the University. The Capital Resources Policy Committee passed a motion in June 1971 to proceed with a tree farm, animal farm and observatory on the land (the tree and animal farms never came to fruition). At Cross’s request, the observatory was named the Rothney Astrophysical Observatory to honour his mother’s side of the family. The site was officially opened in January 1972 by Dr. Margaret Burbidge, then Director of the Royal Observatory, Greenwich, who unveiled the RAO’s sundial to symbolize the emergence of the University of Calgary onto the astronomical scene.

Cyril Challice, the Head of the Department of Physics, gave the initial planning of the site to Dr. T. Alan Clark who was joined in September 1971 by Dr. Eugene F.Milone; the two would become co-directors of the facility in 1975 and oversee its modest beginnings to a million-dollar research destination. The equipment first used was a 16 inch (.4 m) research grade telescope ordered by Clark from England with the initial photometer instrumentation obtained from the University of Virginia. This early photometer was modified over the years to become the Rapid Alternate Detection System (RADS), a system developed at the University of Calgary that allows for precision photometry through light cloud and that can adjust for variations in urban light reflections.

In the early 1980s, a Baker-Nunn satellite tracking camera was purchased for $.01 from the Cold Lake Air Force Base and transported to the RAO where it was installed in 1983. At the same time, Dr. George Coyne, then Director of the observatory at the Lunar and Planetary Lab in Tucson facilitated the acquisition of a 1.5 m metal mirror for the RAO. This became the basis of a $198,000 grant to build an alt-alt mounting for an infrared telescope to permit unblocked views of the entire sky and allow observations at the zenith where atmospheric distortion is minimal. The Cross Educational Foundation provided the funds for a building to house the apparatus and a dedication ceremony for the new 1.5 m, 8 tonne infrared telescope (IRT) was held on May 6, 1987. Dr. George Coyne, S.J., now Director of the Vatican Observatory, dedicated the telescope; Mr. Cross officially cut the ribbon. The telescope was renamed the ARCT or the Alexander Rothney Cross telescope to honour Sandy Cross who had donated more land and significant additional funding over the years. At the time, the RAO was Canada’s only dedicated infrared telescope facility, with its advantage of altitude and extreme dry air conditions that allowed for clear observations.

The 1.5 m mirror was replaced in 1993 by a new generation 1.8 m honeycomb mirror created in the Optical Sciences Centre of the University of Arizona. The Astrophysical Research Consortium at the Apache Point Observatory, New Mexico had offered in the late 1980s to fund ½ the costs of polishing the mirror in return for its short-term usage. Dr. Alan Clark developed the design for the mounting and oversaw its construction; first light was achieved through the newly upgraded 1.8 m telescope in January, 1996. A year later, the RAO celebrated its 25th anniversary.

In 2001, Dr. Milone submitted a grant to build a Visitor’s Centre at the site in order to expand outreach and teaching capabilities. The $400,000 submission was successful; the new Visitor’s Centre and teaching facility was official opened in 2005. Dr. Milone stepped down as Director of the RAO on September 1, 2004. Dr. Rene Plume became Acting Director for a year until Philip Langill was named Director.

The fonds consists of records primarily created or collected by Dr. Milone and Dr. Clark during their multi-decade tenure as co-Directors of the RAO. The records chart the early visions for the observatory and the gradual accumulation of equipment and infrastructure to support teaching and research. Records include correspondence on the acquisition of the land, the purchase of the first telescope (.4 m), subsequent telescopes and mirrors (1.5 m and 1.8 m), the photometry system, and the construction of the domes and the Visitor Centre. The records also include grant applications, budgets and financial materials, and administrative records including meeting notes, agendas and correspondence. Graphic materials document celebrations and ceremonies, and also the various milestones achieved by the acquisition of equipment and construction of various building components as well as teaching activities and outreach including Open Houses.

The fonds is arranged into the following series: History and Development Administration and Operations Technology and Infrastructure Teaching and Research Graphic Materials Electronic records.

For the most part, records were found in file folders or placed in envelopes or other temporary enclosures. Chronological order has either been maintained or artificially created by the arranging archivist in accordance with the majority of the records. Where no file titles were apparent, these have been created according to the content of the records, or transcribed from notes accompanying the records. Duplicates of records and financial administrative records have been destroyed.

All personal information found in the grant applications is restricted.

Associated records: For records of the Cross family, see the A.E. Cross family fonds at the Glenbow Archives.
Related records: For records related to the development and construction of the RAO, see also the Department of Facilities Management fonds, the Board of Governors fonds, and the Executive Suite fonds. For records relating to the bestowing of an Honorary Degree on Mr. Alexander Cross, see Honorary Degree Recipient Collection.