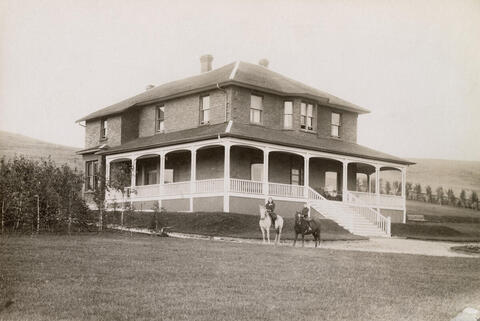 The Riley family prospered as a result of the development of their ranch into the subdivisions of Hillhurst, West Hillhurst, and Hounsfield Heights. Ezra served as MPP (MLA) for Gleichen from 1906 to 1910. He donated Riley Park to the City of Calgary in 1910, and provided the endowment for St. Barnabas Anglican Church in 1912, and was a supporter of Bishop Pinkham College.

Thomas was killed in action in the First World War. Arthur became a successful businessman. Margaret Louise became a children's librarian, storyteller and author. She joined the Calgary Public Library in 1930 and in 1949 became assistant librarian. She published two children's books, Mystery Horse (1950) and Train for Tiger Lily (1954), and a novel for adults, One Happy Moment (1951). The Louise Riley branch of the Calgary Public was named after her. Dorothy was active in amateur theatre. She married Dr. Paul Gishler, a researcher in physical chemistry. They had two sons, John, 1942 - , and Richard, 1947- .

The literary works of Louise Riley are not to be published without the permission of Richard and John Gishler.

The records of Paul Gishler are held by the University of Alberta Archives. Thomas E. Riley's diaries are also held at Glenbow.