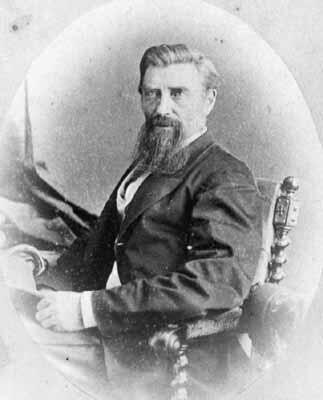 Richard Charles Hardisty, 1831-1889, was probably born at Fort Mistassini, Quebec. He was educated at St. John's College, Red River, and joined the Hudson's Bay Company in 1849. He served in the Red River until 1854, was in charge Cumberland House District, 1855-1861, and from 1862 to 1872 served at Carlton House, Rocky Mountain House and Fort Victoria. In 1866 he married Eliza Victoria McDougall, daughter of Reverend George McDougall. They had three children, Richard George, 1871-1943, Clara Victoria (Graham), 1868-1933, and William Percy, 1879-1955. He became chief factor in charge of Upper Saskatchewan District in 1872, with headquarters at Fort Edmonton. In 1888 he was called to the Senate, as the first senator for the District of Alberta. For further information see Senator Hardisty's Prairies, 1849-1889 / James Grierson MacGregor. -- Saskatoon : Western Producer Prairie Books, 1978. See also Shirlee Smith's entry, "Richard Charles Hardisty", in the Dictionary of Canadian Biography, vol. XI. -- Toronto : University of Toronto Press, 1982, p. 383-384.

Purchased from Lillian Graham and gifts of Richard Hardisty and Lillian Calder, 1957-1981.

Other records of R. C. Hardisty as an HBC employee are held by the Hudson's Bay Company Archives; a small collection of Hardisty family material is in the Ontario Archives (MU 2114/2115).

NA-4216 is included with the Oliver B. Buell fonds