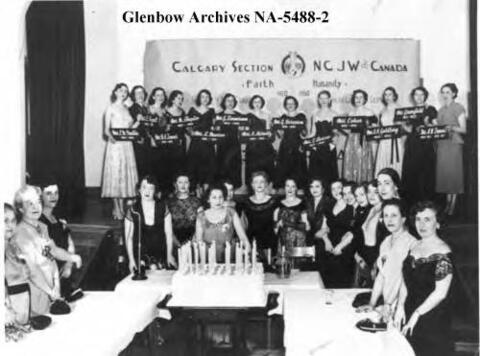 The National Council of Jewish Women of Canada, a women's voluntary service organization, was established in 1897 in Toronto, Ontario. A section of the council was founded in Calgary, Alberta in September 1920 with Mrs. N. Zemans as the first president. The aim of the organization was to further the welfare of the Jewish and general communities through education, service and social programs, and its motto was "Service to Humanity". The Calgary section was very active from the 1940s through the 1960s, during which time it ran a thrift store, had a welcoming committee for Jewish newcomers to the city, canvassed for fundraising campaigns, hosted study and book groups, and acted as a general liaison with the larger Calgary community.

The fonds consists of Presidents' Books which include minutes, newsletters and records of the group's activities (1951-1963) compiled by these women: Martha Cohen, Miriam Dvorkin, Clarice Chodak, Rose Rosen, Muriel Konetz, and Ruth Carnat. The fonds also consists of general records of the Calgary section; proceedings of NCJW Biennial Conferences (1957-1963), including one organized and held in Calgary in 1963; and various newsletters, circulars and manuals issued to local sections by the national body.