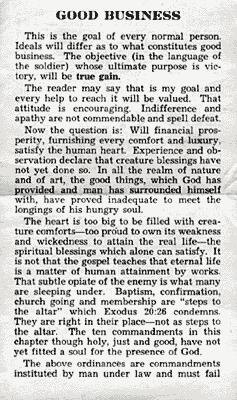 David Morrison "Dave" Naismith, ?-1950, of Mount Forest, Ontario, moved to Alberta in 1909 and homesteaded in the Flowerdale district south of Scotfield and Youngstown, which later became one of Alberta's Special Areas. In 1920 his wife, Isabella, ?-1938, and sons John Darby "Jack", David Peter "Pete", and Joseph James "Jim", joined him. Dave was a member of the Plymouth Brethren, and he wrote and published may religious tracts. Jack, 1894-1968, trained as a teacher at Calgary Normal School in 1912. He served in the army in the First World War and in the navy in the Second World War. He farmed just east of Acadia Valley, and later took over the family farm with his brother, Pete.

He was an amateur inventor and in the 1950s built a cloud seeding machine. In 1962 he founded the short-lived All Canadian Party. He was also involved in hypnotism, weather control (rain-making), zone therapy, and the Rosicrucians. Pete, 1897-1991, farmed until moving into Hanna's Acadia Lodge for seniors in 1984. For much of his life he was extremely interested in wind power, and he built several windmills. Jim, ?-1954, held a variety of jobs, including trucker, and died in Drumheller. Mary (Hedley), 1886-1966, a sister who apparently never lived in Alberta, was a school teacher and died in Burnaby, British Columbia. She had six children.