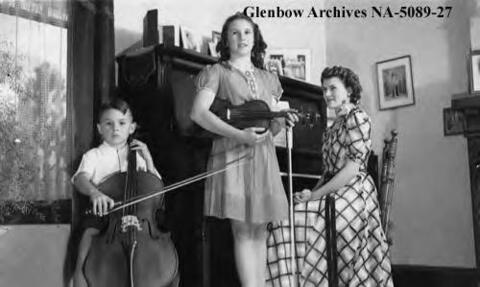 Walter George Munch, 1897-1964, was born in Minnesota, USA. He came to Reid Hill, Alberta in 1903, and to Calgary in 1906. He was an office boy and later carman for Canadian Pacific Railway (CPR), 1914-1919, and worked for the Calgary Storage and Cartage Company, 1920-1928. He then worked at a variety of jobs before starting a long career with J.R. Watkins in 1938. Watkins Products sold spices and flavouring extracts door to door, and Walter remained with the company until his death, rising to the position of provincial supervisor.

In 1919 he married Effie Duperrier, 1898-1985, and they had three children, Evelyn (Waltham), Audrey (Munro), and George. Effie, who was born in Boston, came to Calgary in 1907. She was very active in the Women's Conservative Association and the Calgary Junior Symphony Orchestra. After Walter's death she married Alexander MacDonald in 1969.

The fonds consists of family correspondence, greeting cards, postcards, certificates, and newsclippings; and scrapbooks and programs related to musical, dramatic and dance events in Calgary. Includes photographs of the family, Calgary Storage and Cartage Company, Watkins salesmen, and musical events.

The item from the University of Calgary Law Library is at M-7076-29a. Its provenance is unknown.