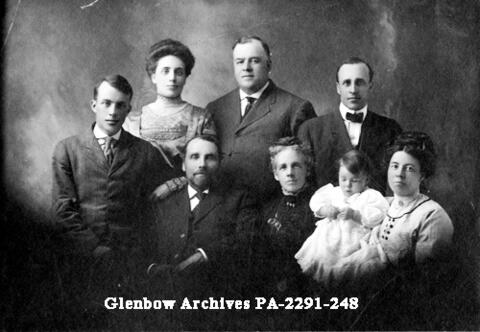 Colin Campbell McLaurin, 1854-1941, was born in Ontario and attended Woodstock College from 1871 to 1877. He was a Baptist minister in Ontario and became a pastor in Brandon, Manitoba in 1897. He and his wife, Margaret Rosser, 1847-1925, had four children, Anna, Bessie (McKinnon), Colin Campbell, and William R. The family travelled extensively and finally settled in Calgary in 1907, after which Rev. McLaurin was in charge of Baptist missions in Alberta.

Campbell McLaurin, 1894-1981, graduated from Calgary Normal School and taught in Medicine Hat from 1916 to 1918. He served in the Royal Flying Corps in the First World War, and studied law at the University of Alberta. He was admitted to the Bar in 1922 and appointed QC in 1935. In 1942 he was appointed to the Trial Division, Supreme Court of Alberta from the firm of Fenerty and McLaurin, and to the Chief Justice of the Trial Division, Supreme Court of Alberta in 1952. He retired from the Bench in 1968. He established the Bow River Beautification Association (later the Calgary Beautification Trust) for Prince's Island. He married Jessie Anna McLeod, ?-1970, in 1927.

McLaurin recounted the story of his world travels in Without Reservations: flying around the World / Campbell McLaurin. - Calgary: 1959.

The fonds consists of holiday films of the Rocky Mountains and across Canada (1930s-1950s) and films of Baptist meetings and Bible camps at Gull Lake (1930s-1940s); photographs and slides of Rev. McLaurin's missions, travels and summer school at Gull Lake (1910s-1920s); photographs of the McLeod and McLaurin families (1880s-1960s); and slides of Calgary (1966). Also consists of Campbell's records: Bow River Beautification Association correspondence, briefs, accounts and reference files (1968-1981); travel diaries (1952-1979); diary (January 1929); correspondence with William Lyon Mackenzie King (1933-1945), scrapbooks and newsclippings; and Campbell and Jessie's marriage certificate. Includes Jessie's school notebooks (1911-1912), postcards and correspondence (1915-1916, 1926-1927) and travel diaries (1963-1964). Also includes film "Wings Over the North" (1940s) produced by Canadian Pacific and Alberta Travel Bureau about the role of pilots in opening up the north.

Other Campbell McLaurin records are held by the Legal Archives Society of Alberta.