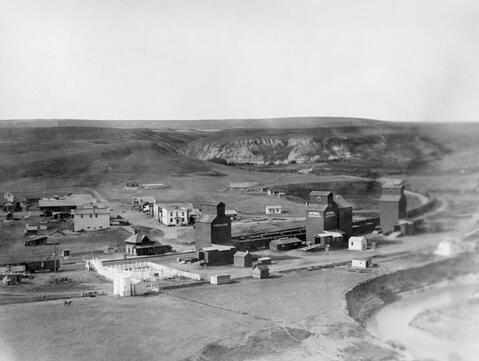 In his later years he published a number of books on the history of the Rosebud area including The Rosebud Trail (1963), The Prairie Hub (1967), Westward Bound (1968) and The Dinosaur Valley (1971). For further information see Stone Gods and Haunted Schoolhouses : Nostalgia and Vernacular Local History in Rosebud, Alberta, 1960-1983 / Janene Rae Holman. -- unpublished MA thesis, University of Calgary, 2015.

The fonds consists of John's articles on John and George H. Gooderham, Dick Allen, the Gordon Ironsides and Fares Ranch, the Blackfoot and local history, including a draft of Scorched Hides and Branding Irons. Also consists of photographs of Gleichen area, Drumheller, Martin ranch, Rosebud area and the Wishart family.