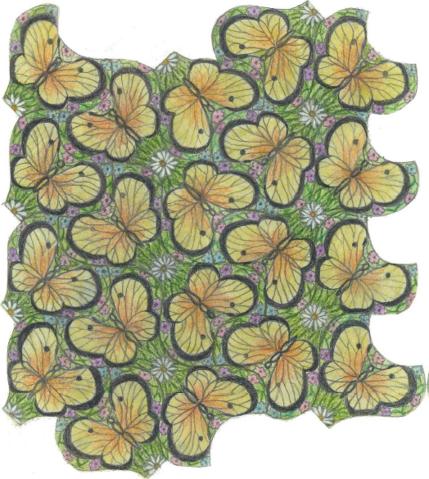 92 cm of textual and graphic records including:

Marjorie Rice was an American amateur mathematician who is most famous for her discoveries in geometry. Born Marjorie Jeuck in St. Petersburg, Florida in 1923, Rice was inspired to explore geometric tessellations after hearing about the work of mathematician Martin Gardner. Despite having only a high-school education the housewife and mother of five began devoting her free time to experimenting with pentagon tilings at her kitchen table. Using her own notation, Rice sketched out never-before-seen patterns and used her own notation style to describe the constraints on and relationships between the sides and angles of the polygons. By 1977, her extensive drawings and calculations had led her to discover four new types of tessellating pentagons (Types 9, 11, 12 and 13) and over sixty distinct tessellations by pentagons. Rice’s work was eventually examined by mathematics professor Doris Schattschneider, who deciphered Rice’s notation and formally announced her discoveries to the mathematics community. Rice went on to author/coauthor several articles and essays on geometry and has been recognized by the Mathematics Association of America. A mosaic created from one of Rice’s tiling patterns graces the Marcia P. Sward Lobby at the Dolciani Mathematical Center at Hunter College in New York, NY. Rice died in San Diego, California in 2017 at the age of 94.

“I thought, my, that must be wonderful that someone could discover these things which no one had seen before, these beautiful patterns.” ~ Marjorie Rice.

Fonds consists of records created or received by Marjorie Rice during her mathematical research and discovery of tiling patterns, and her study and exploration of tessellations and patterns derived from various geometric shapes.

No accruals are expected

These records form part of the Strens Recreational Mathematical Collection