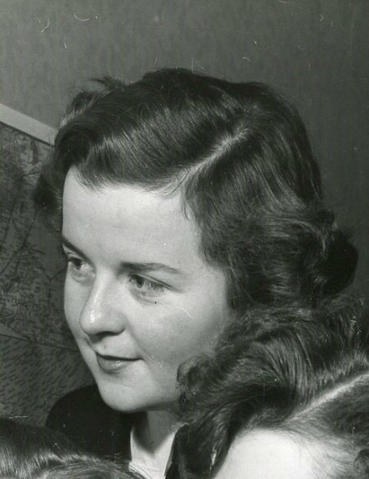 Marie Ann Murray was born on May 1, 1921 in London, Ontario to Helen Marie Murray and Dr. Thomas Francis Murray. Shortly after her birth the family moved to Calgary, then to the Tsuut'ina Nation Reserve where her father was the Medical Superintendent, Justice of the Peace and Indian Agent for the reserve. She received her education at the Sacred Heart Convent In Calgary. After graduating, she worked as a radio station receptionist. Marie Ann Murray (W2320) volunteered for service in the Women’s Royal Canadian Naval Service (WRCNS) on April 14, 1943 and was sent to H.M.C.S. Conestoga, Galt Ontario On November 1, 1943 for initial training as a clerk. In December 1943 she received training as a technical writer and was eventually sent overseas to Oxford and then to Greenock in Scotland in September 1944 where she served as a writer. She was discharged due to demobilization on July 2, 1946 but volunteered to serve until August 1, 1946 continuing as a writer. Her service commitment completed, she returned to Calgary where she began a 40 year career as an Administrative Assistant in Calgary’s oil sector. She married a Mr. White (full name and date of marriage unknown) and changed her name to Marie Anne White. Upon retirement in 1963 she became an active and dedicated volunteer and passed away at the age of 92 on July 8, 2013.

Items were in the possession of donor and donated to the Military Museums naval gallery in 2014.

The fonds consists of an unbound scrapbook created by Murray while in the Canadian Navy during World War II entitled “Snaps and Scraps – My Life in the Navy”. The scrapbook contains her certificate of service, writer’s history sheet, leave documentation, photographs, snapshots, and such memorabilia as theatre programs, train tickets, birthday and Christmas cards, postcards, correspondence and newspaper articles etc.

The contents of the scrapbook are divided into four files:

Fonds processed by Yvonne Hinks, May 2017.

This AtoM record created by Jason Nisenson, May 2017.