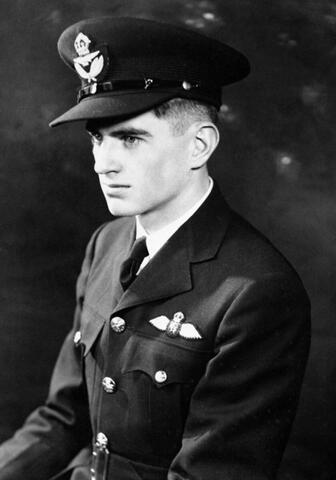 John Cook Leslie, 1882-1953, was born in Ontario. He worked for the Merchants Bank, which transferred him to Calgary, Alberta in 1902. In 1908 he quit the bank and established J.C. Leslie and Company, a real estate firm. He married Agnes Bell in 1912 and they had five children. He remained in the real estate business until his death.

Their son, John Clifford Leslie, 1920-2010, known as Jack, was born in Calgary. He spent four years as a pilot in the RCAF during the Second World War. He married Jean Logan, 1920-2016, also of Calgary, in 1942. He earned his AACI degree from the Appraisal Institute of Canada, and took over J.C. Leslie and Company after his father died. He was an alderman for the City of Calgary from 1961 to 1965, and served as mayor, 1965-1969. He was a strong supporter of the Progressive Conservative party. After his term as mayor he returned to the real estate business. Jean Leslie, an avid historian, has published several articles on Calgary history.

Accession 5098 is in the vault and has no M number.

December 2013. No restrictions, including the ones mentioned below, remain.

As of August 29, 1991, only the Saucier, Cummer and Batchelor interviews are still restricted.

On July 26 we received a letter from Jean Leslie removing any restrictions from the family, mayoral and business papers. The "CPR - City of Calgary Redevelopment" file is also no longer restricted.