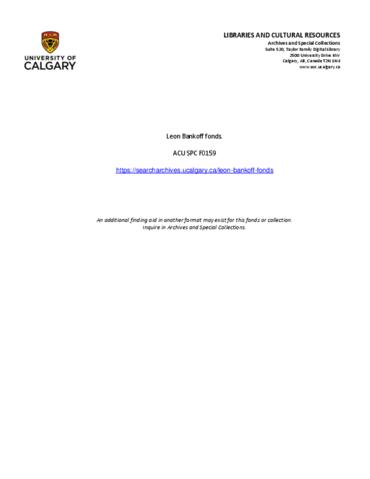 5.67 m of textual records and other material.

American dentist and mathematician Leon Bankoff was born in New York City, New York, on December 13, 1908. Attended City College of New York and dental school at New York University and University of Southern California. Became a prominant Los Angeles dentist whose list of patients included rock stars and other luminaries of the Beverly Hills-Hollywood scene. His early interest in mathematics resurfaced in the late 1940s and he began to publish regularly in mathematics journals and to edit the problems section of Pi Mu Epsilon Journal. His interests included Morley's triangle and the shoemaker's knife of Archimedes. He counted among his friends famous mathematicians from around the world. Died in Los Angeles, California, on February 16, 1997. Additional biographical material available in The College Mathematics Journal, v. 23, n. 2, March 1992, p. 99-117. (Acc 5167, 5.13)

Donated by Francine Bankoff in 2002.