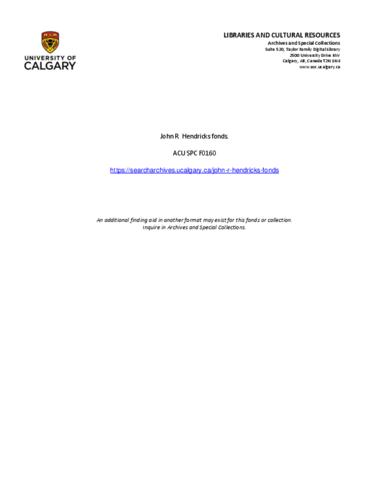 26 cm of textual records and other material.

Canadian meteorologist and amateur mathematician, widely considered the world's foremost expert on magic squares, John R. Hendricks was born in Regina Saskatchewan, September 4, 1929, and died in Victoria, British Columbia, July 7, 2007. He obtained a degree in mathematics from the University of British Columbia in 1951 and began his career as a meteorology instructor in the N.A.T.O. flight training program. He worked for the Canadian Meteorological Service for thirty-three years, retiring in 1984 in Winnipeg, Manitoba and then in Victoria in 1996. He made many published contributions to meteorology, statistics and climatology and participated in voluteer service groups including the Monarchist League of Canada; he was the recipient of a Canada 125 Medal in 1993. His lifelong interest in recreational mathematics began at the age of thirteen when he started collecting magic cubes and squares. He was the first person in the world to successfully make and publish five and six-dimensional magic hypercubes as well as inlaid magic cubes and squares; he was also the first to publish diagrams of all 58 magic tesseracts of order 3. He published many articles on these subjects in the Journal of Recreational Mathematics as well as in other journals; he also self-published many books and papers. In retirement, he gave public lectures on magic squares and cubes in schools and to teachers' conventions in Canada and northern U.S. He developed an enriched mathematics course on magic squares and cubes which he taught for seven years at Acadia Junior High School in Winnipeg. He only began using a personal computer for his calculations in 1996 when Parkinson's Disease made it too difficult to use his hands; until then his only aid for his work was a programmable calculator.

Donated by Celia Hendricks in 2007.

Fonds consists of manuscripts and published works by J.R. Hendricks, a compact disk containing many of his publications, works about him and works by others.