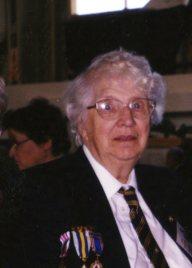 Joan Hofmann was born in Kamloops, British Columbia in October of 1924. During WWII she enlisted with the Canadian Women's Army Corps (CWAC) and received basic training at the Vermilion, Alberta Camp and served domestically in Victoria, British Columbia. She remained with CWAC following the war and was stationed domestically in Regina, Wainwright, and Vancouver. She also served overseas in Korea and Germany. She now lives in Calgary, Alberta.

This AtoM record was created by Jason Nisenson, March 2016.