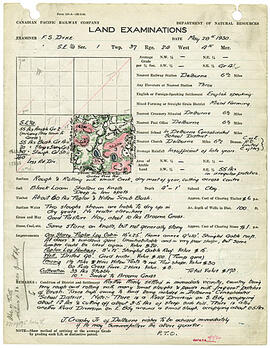 These land examination reports were prepared by CPR's Land Inspectors, and include the following elements (not necessarily all of them in any single report), which helped the railway determine the value of the land, and what price they should charge for it: average grade; nearest railway station; elevators; nationality of nearest settlers; type of farming in district; nearest creamery, post office, school, church; average rainfall; area of arable land; soil type; timber cover; surface water and well depth; grass and hay cover; stone and coal in district; improvements made; and general remarks.

Consists of views of rodeo and the Calgary Stampede, and historical photographs of cattle, horses etc.

Consists of views of WHC activities, personalities, and special events including 1993 AGM.

Series consists of views of the construction of the WHC building and exhibits, WHC grand opening, personalities, fundraisers, special events, and other activities.