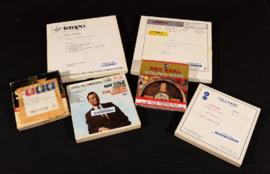 The fonds consists of records documenting the history, administration, and activities of EMI Music Canada and its predecessor labels, Capitol Records–EMI of Canada, Capitol Records of Canada, and Capitol Records Distributers of Canada. The records include studio master recordings, demos, photographs, memorabilia, correspondence, business reports, promotional material, press clippings, financial statements, music videos, legal agreements, presentations, and other material reflecting the activities of one of Canada’s largest record labels from approximately 1949 to 2012. It includes four series based on the EMI Music Canada recordkeeping system: President’s Office, EMI Canada 50th Anniversary, Artist & Repertoire (A&R), and EMI Canada head office artwork. The A&R series has been divided into 8 sub-series: Administration files; Audio recordings; Video recordings; Photographs; Record awards; Demo submissions; Artwork; and Commercial releases. The President’s Office series mainly contains subject correspondence files and artist files created and maintained by the company’s president, Deane Cameron, from approximately 1992 to 2012, along with reports, budgets, marketing plans, and presentations. These files provide insight into the executive leadership of EMI Canada over the span of Cameron’s tenure, documenting the range of artists supported by EMI Canada as well as some of the developments in the wider Canadian music industry over the 1990s and 2000s. The files contained in the 50th Anniversary series document the company’s history from 1949 to 1999, and includes photographs, memorabilia, posters, pamphlets, catalogues, LPs, and 45s reflecting celebrations held in 1999 and research that led into the production of a commemorative book and CD box set entitled, Fifty Years of Music: The Story of EMI Music Canada. The administration files in the A&R series primarily consist of artist files and general files. The artist files document the artistic development and recording careers of a wide range of artists signed to EMI Canada and its affiliate labels. The general A&R administration files span a variety of activities in the operation of the department, primarily however documenting business relations with EMI international branches, attendance at music conferences, seeking new talent, commercial releases and catalog listings, and demo assessments. The audio recordings include both released and unreleased material and a wide range of EMI Canada artists’ original studio masters, demos, outtakes, alternate mixes, remixes, instrumentals, live recordings, and production masters. The video recordings are largely edited masters and promo versions of music videos as well as promo clips and live performances by artists on the EMI Canada label as well as Canadian and international artists distributed by the label. There are over 20,000 photographs of EMI Music Canada artists taken by professional photographers for use as album artwork, publicity stills, and promotion. The A&R artwork consists of over 11,000 graphic items used in the creation of album art for EMI Music Canada and related labels. Also included are 672 gold and platinum record awards received by EMI Music Canada, as well as posters, paintings, and photographs that were used as decorative artwork at the label’s headquarters in Toronto. 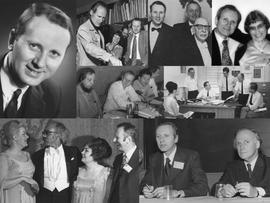 File consists of a typescript copy of a speech given by Ian Hamilton at event for Paragraph Books, with handwritten edits. Possibly for Ian Hamilton at Librarie Paragraphe Books and Breakfast (bookstore) in Montreal, Quebec held April 10, 2011.

File consists of magazine and newspaper clippings and printouts of reviews of Ian Hamilton's Ava Lee novels taken from various publications including Quill & Quire, Toronto Star, The Globe and Mail, National Post, Morgenpost, Bucher, The Walrus, The Paris Star, The Brantford Times and others. Also, includes copies of reviews and blurbs published in a number of German magazines in October of 2011.