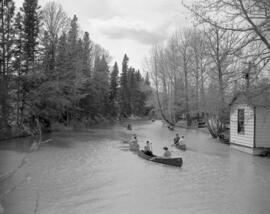 Fonds consists of records that reflect Dr. Barry's research and scholarly interests into specific aspects of Canada's international relations including his research into the into specific aspects of Canada's international relations including the research that culminated in his book Icy Battleground: Canada, the International Fund for Animal Welfare, and the Seal Hunt, the relationship between Canada and the European Union regarding fishing practices, and research on Herbert Norman, a Canadian diplomat accused of communist activities by the United States in the 1950s. Records include reference articles, newspaper clippings, reports, correspondence, government briefing notes and backgrounders, presentations, submissions and newsletters. Fonds also consists of records related to Dr. Barry's service on the Federal Electoral Boundaries Commission 2002-2003.