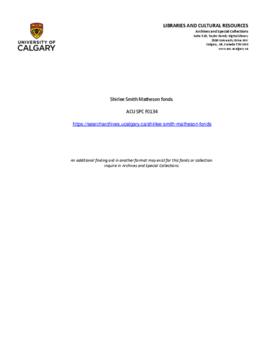 Cassette audio tapes and VHS video recordings of media interviews with Shirlee Matheson and of her readings. Also interviews Shirlee copies from radio and interviews she conducted with individuals incl. Father Jungbluth of Hudson Hope Church in Moberly asnd others in that community in 1980-1981

Kane related records including drafts (November 2006-2008) of The Great Escape Across Polar Sea (later renamed race to the Polar Sea) (2006-2008), and reviews; developmental drafts and research material and a review of How The Scots Invented Canada.

How The Scots Invented Canada drafts (between 2009-2010), one edited by Phyllis Bryce; draft article Return to Rae Strait (2012) to appear in Canada's History. 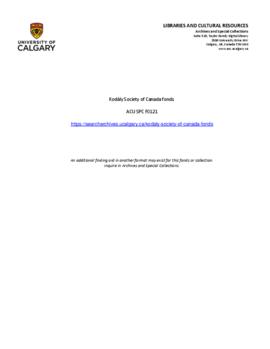 Fonds consists of official records of the society including minutes, reports of officers and committees, membership lists, financial statements, conference and workshop reports and issues of Notes and Alla Breve. Includes several theses on the Kodály method, some recordings of addresses at the 1984 and 1994 conferences and the Kodály Institute of Canada seal.