Consists of a diary, training notebooks, and a scrapbook.

Consists of black and white photos covering time on the HMCS Malaspina, the HMCS Caraquet, and the HMCS Cape Breton with highly decorated full page designs on certain pages. Album is well captioned in white ink.

Scrapbook consisting of items cut out of magazines and newspapers and a collection of airplane and ship cards printed and distributed by companies such as Players, Cracker Jacks. Contains many loose items. 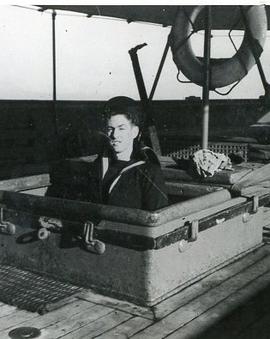