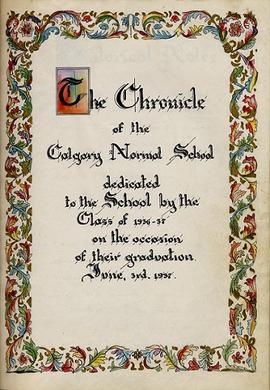 Consists of two images, the men's hockey team and the cast of Peggy and the Pirate. The images also appear in the Normal School yearbook of 1928-1929, pages 23 and 33.

Consists of two large framed class portaits of Calgary Normal School sutdents and their instructors. The portraits are made up of individual portraits of each individual which have been pasted onto a large board, annotated with names, and framed.

Consists of a photograph of the Calgary Normal School students and staff, 1938-1939. Also includes photographs of Margaret Saunders at her university graduate and with some of her school classes, a newsclipping, and an obituary.

Domesday book and other records

Series consists of the handlettered and leather-bound Chronicle, dedicated to the Normal School by the students of 1936-1937 on June 3, 1937. Students called it the Domesday Book. The Chronicle includes historical notes from 1906, and valedictory speeches from 1936-1950; a Class of 1937-38 50th anniversary reunion dinner menu and afterdinner speech; two micro-cassettes (Tape 1 Side A includes speech given by Phillip Faucet, Tape 1 Side B, and Tape II includes an interview with Normal School teacher M. V. Graham. Series also consists of photocopies of photographs of groups in front of Heritage Hall, where the Normal School resided (includes names of individuals in the photographs).

Series consists of photographs of the Calgary Normal School received from various sources.