Around the World Trip

Consists of material gathered and created by Douglas and Carol Sallis during a cruise taken during 2003. Includes map, notes, and photographs.

Series consists of records relating to Sallis's time in Papua New Guinea, including: letter of recommendation for Sallis from Papua New Guinean Secretary of Health, immunization poster, and Sallis's personal statement for his CUSO application.

Photographs in binders are predominantly captioned. 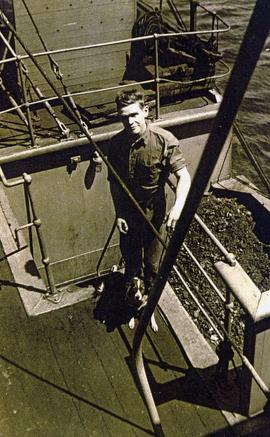 Sallis completed high school in 1947 and went on to work in pre-medicine immediately after at the University of British Columbia. He entered into Queen's University in 1949, eventually earning his M.D. in 1955. Later in life, Sallis took courses in history at the University of Wisconsin-Green Bay and by correspondence from UBC.

Sub-series consists of 5 albums in original binding and order. Album titles have been supplied by archivist. File 3 "Sallis/Willms family album 3" pertains in particular to the courtship, marriage, and early years of the marriage between Douglas Sallis and Margaret Willms.

Greyhound trip from Vancouver to Halifax

Photographs pertain to Sallis's transit from the west to the east coast of Canada as part of his movement during service in the Canadian Merchant Marines during WWII.