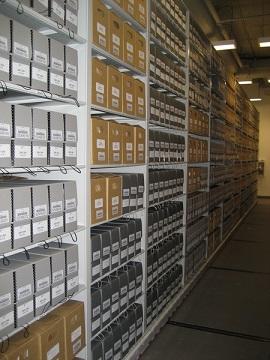 On December 17, 1981, the Board of Governors ruled that "destruction of university documents requires prior written approval of the appropriate university officer and the University Archivist." This gave the Archives the responsibility for creating retention rules for university records; however, the Information Management Program would not be approved and begin activities until 1996.

Early in 1982, the Director of Libraries was appointed the Coordinator of the University Archives. In November of that year, the Archives program was established and began operations. Jean Tener, the literary archivist employed in the University Library's Department of Rare Books and Special Collections, became the first University Archivist in December of 1983 after completing the National Archives summer training school.

Jo-Ann Munn Gafuik took over the responsibilities of the University Archivist when Jean Tener retired in 1992. With the anticipation of freedom of information legislation, President Murray Fraser approved the Information Management Program in 1996. This program proposed to manage active records through the development of a uniform classification system, records scheduling, and the automation of the program. The Freedom of Information and Protection of Privacy Act (FOIP) was proclaimed for all post-secondary institutions in 1999 and the University Archivist, Jo-Ann Munn Gafuik, took on the role of the Information and Privacy Coordinator for the University of Calgary.

In 2003, Information Resources created a new department, Archives and Special Collections, which brought together all those units holding primary resources under a new Assistant Director. University Archives, along with units which had formerly been a part of the Library -- Special Collections, Canadian Architectural Archives, and the Museum of the Regiments Archives and Library -- formed the new department. Teresa Reilly was appointed the first Assistant Director and reported to the Director of Information Resources. In 2006, Information Resources became Libraries and Cultural Resources led by the Vice-Provost (Libraries and Cultural Resources) and University Librarian.