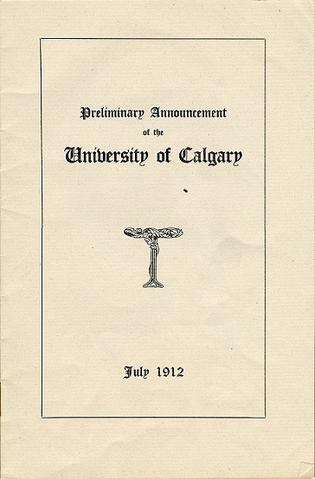 In 1910, a number of Calgary business owners and the municipal government began a movement to establish a private university in Calgary. By October 1912, classes had begun in what was optimistically called the University of Calgary. Classes were held in the Public Library under the Faculties of Arts and Law with a staff of four professors, 24 regular students and 101 part-time students (those taking one class or more). The members of the Board of Governors were: Thomas Henry Blow (Chair), W.J. Tregillus (Secretary), J.S. Dennis, James Short, William Georgeson, H.W. Riley and R.B. Bennett. The first faculty members were Dean Edward E. Braithwaite, Professor F.H. MacDougall (Chemistry and Mathematics), Professor Mack Eastman (History and Politics) and Professor F.C. Ward. Funding for the University came from private donations and donations of land and money from members of the Board: W.J. Tregillis donated 160 acres in the Rosscarrock Subdivision on the Old Banff Coach Road; T.H. Blow donated additional monies and the City set aside 50,000. An architectural plan for the proposed site was drawn up by Mr. Dunnington-Grubbs, one of Canada's foremost landscape architects.

The University applied three times (1911, 1913 and 1915) for the right to be given degree-granting powers but was turned down all three times. Reasons cited were the financial burden for the province to sustain two Universities and a fear of the "evils of competition and rivalry". Since University powers were with-held, by 1915 the official name of the University had become Calgary College, although it was still known locally as the University of Calgary. Calgary College closed in 1915 due to the collapse of the real estate boom, continuing squabbles with the province and the beginning of the First World War.

Fonds consists of "An Act Respecting the University of Calgary", a report of the commission appointed to consider degree-granting powers, annual calendars, a copy of the architectural plan of university, an invitation to closing ceremonies (1913), a newsclipping, and preliminary announcement containing artist's rendering of proposed university layout.