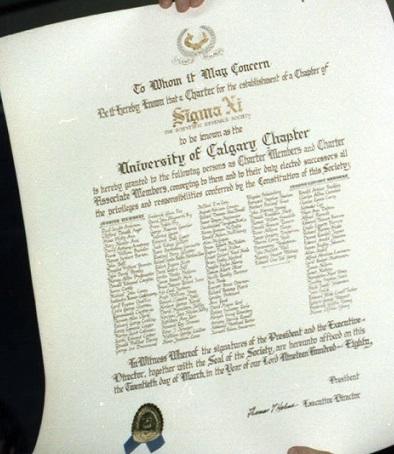 Society of the Sigma Xi. University of Calgary Chapter

Sigma Xi (pronounced "chi"), The Scientific Research Society encourages original investigation in science by maintaining companionship among investigators through association with chapters and clubs; by holding meetings for the discussion of scientific subjects; by preparing and distributing scientific publications; by means such as "Grants-in-Aid of Research"; by presenting awards for excellence in research; and by maintaining lectureship programmes. Local clubs and chapters are governed by the Society's constitution and by-laws.

Sigma Xi, Calgary Chapter had its beginnings in 1965 when Dr. Richard P. Pharis, Department of Biology, started organizational activities. The University of Calgary Sigma Xi Club was installed in 1967, and monthly noon luncheon meetings started in fall of 1971. In its early years, the Club concentrated on arranging three public lectures a year, and in 1972, began offering the Student Research Prize. It obtained authorized club status in 1979 and was inaugurated as a chapter in 1980. The first president was D.J.I Fry, and the first secretary was Dr. Pharis.