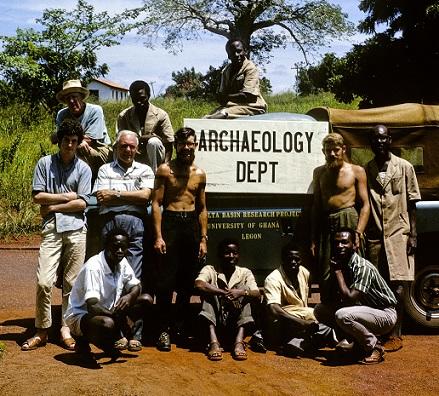 Peter Lewis Shinnie was born in London, England on January 18th, 1915. From a very early age he was fascinated by history, especially Egyptology. Shinnie attended university at Christ Church, Oxford from 1934-1938 where he received a Bachelor of Arts degree and eventually a Master of Arts degree in Egyptology with a special focus on ancient languages including hieroglyphics. His first archaeological dig was at Maiden Castle in England where he assisted Mortimer Wheeler and worked with other future famous archaeologists including J. Desmond Clark.

From 1939 to 1945 Shinnie served as a reserve officer in the Royal Air Force. After the War he worked on a dig at Tell el Atshana in Turkey and in 1946 was appointed Assistant Commissioner for Archaeology for the Sudanese government. In 1948 he was promoted to Commissioner, a position he held until 1955. During his time as Commissioner he directed excavations in the Sudan at sites such as Amara West, Soba and Tanqasi. From 1958 to 1970 Shinnie held two posts as professor and head of a Department of Archaeology: the first at the University of Ghana, the second, from 1966 at the University of Khartoum.

In 1965 he began directing excavations at ancient Meroe, a site 140 km north of Khartoum. He worked on and off on this project until 1984. He has also held posts as a visiting professor to the University of Birmingham in 1966 and to the State University of New York at Buffalo, New York in the spring of 1970. In October 1970 Shinnie accepted the position of professor and head of the only archaeology department in North America that existed at the time -- at the University of Calgary. While at this University he has directed many more excavations including Daboya, Ghana (1978-1979, 1982-1983) and Asante (1986-1993).

Professor Shinnie's main area of interest and expertise has been in the post-paleolithic archaeology of West Africa, the Near East, the Sudan and Egypt. He is well known for his contributions to modern archaeological excavation techniques and his belief in an 'area approach' to archaeology whereby researchers becomes acquainted with the territory, customs, language and culture of the area they are researching. His various honours include honourary life member of the Society of Africanist Archaeologists, Fellow of the Society of Antiquitaries, honourary Doctor of Letters (LLD) from the University of Calgary in 1983 and as a recipient of a "Festschrifts" in 1992. He died on 9 July 2007.

Fonds consists of personal and professional records created and collected by Professor Peter Lewis Shinnie throughout his time in England, Africa and Canada over a seventy year period. The records relate primarily to the academic activities carried out by Shinnie in roles such as professor, advisor, archaeologist, colleague, friend and father.

The fonds is divided into the following series: