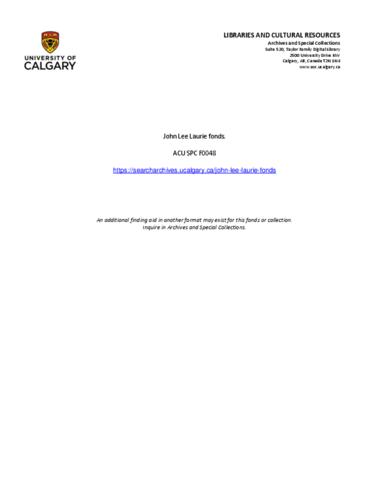 13 cm of textual records and other materials.

Canadian educator and political activist. John Lee Laurie was born in Ayr, Ontario, October 23, 1899. Educated at Galt Collegiate Institute, University of Toronto and Calgary Normal School. Came west to Manitoba in 1920 and the following year to Alberta. Taught in several rural communities before moving in 1923 to Calgary, where he taught at Western Canada College, 1923-1927, and Crescent Heights High School, 1927-1956. In 1939 he first became interested in the problems facing Alberta Indians. Over the next twenty years he espoused Indian causes and assisted many Indian youth in furthering their education. Acted as Secretary of the Indian Association of Alberta, 1944-1956. He counted many Indians among his friends and was adopted in 1940 by Stoney Chief Enos Hunter and his wife, who named him White Cloud. In 1956 Calgary's Junior Chamber of Commerce selected John Laurie as Calgary's outstanding citizen of the year, and in the same year, the University of Alberta conferred on him an honorary doctor of laws. Calgary's John Laurie Boulevard is named in his honour.