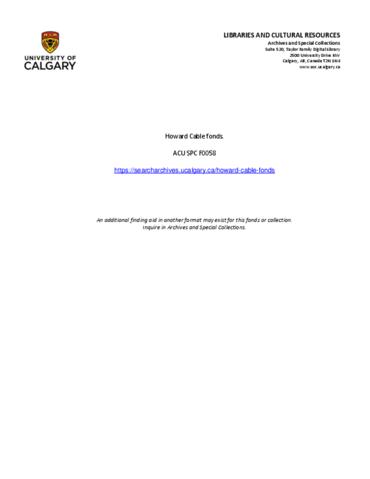 7.13 m of textual records and other material.

Howard Reid Cable was a Canadian conductor, arranger, composer, music director, scriptwriter, and producer. He was born in Toronto, Ontario on December 15, 1920. Cable studied piano, clarinet, and the oboe and played in the Parkdale Collegiate Institute Orchestra under Leslie Bell. He also studied at the Toronto Conservatory of Music.

Cable began his radio career in 1936 for CFRB Toronto as a programmer and scriptwriter. He began working for the CBC in 1941 as a composer of incidental music. He also produced and directed events at the Canadian National Exhibition. In 1967 he became the on-site producer for Expo ’67 in Montreal. Cable began working with the Canadian Brass as an arranger in 1977, during his association with the ensemble, wrote more than 80 compositions and arrangements. In 1986, he began to guest conduct leading Canadian orchestras in concerts featuring his own arrangements. The following year he became the music director of the Halifax Summer Pops Orchestra. Over the years, Cable composed, arranged and conducted for many musical groups including the Hannaford Street Silver Band.

Cable worked in musical theatre and other musical endeavors. From 1964-1967, he worked in New York as a studio conductor and on Broadway. His Canadian theatrical credits include associations with the National Ballet, as well as the Banff, Shaw and Charlottetown festivals. Cable was music director of the Summer Musical Theatre training program (1975-1983) and program head (1983-1985) at the Banff Centre. He was also the head of the music department at Humber College, Toronto (1982-1985) and music director of the Royal York Hotel, Toronto (1974-1986). In 1989, Cable began a summer training program in musical theatre techniques and production at Dalhousie. He composed numerous scores for CBC radio and television, the National Film Board, Calgary International Organ festival and the 1988 Olympic Winter Games arts festival and gala in Calgary.

In 1980, Cable received the Canadian Band Directors’ Association Award for his contribution to the development of Canadian band music. He received an Honorary Doctorate of Fine Arts from University of Lethbridge in 2002, and was appointed a member of the Order of Canada by the Governor General in 1999. Cable died in 2016.

Records arranged in the following series:

Within each series, records are further arranged in thematic groupings (if applicable) and then in ascending chronological order.

Majority of text is in English but some text is in French, Spanish, Japanese or German.

Title based on the contents of the fonds.