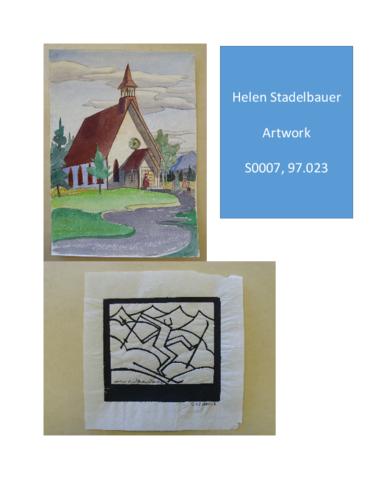 Helen Barbara Stadelbauer was born in Calgary on December 20, 1910 to Simon Stadelbauer and his wife Josephine Marie Johnson. She attended public schools in Calgary for her elementary and secondary education. In the sixth grade, she had a teacher who had recently completed her art training at Columbia University in New York City, and was very impressed by her and her work. "Then and there I decided and determined that I too would go to New York and Columbia University. I never lost sight of that goal." [Autobiography, File 1.01]

Following her graduation from Crescent Heights Collegiate High School in 1931, Stadelbauer attended the Calgary Normal School, completing the requirements for her First Class Certificate in January 1933. She was employed as a teacher in a rural school near Calgary by the Delaware School District for four years, following which she taught for a further four years in a two room cottage school house in the city. From 1936 Stadelbauer continued her professional training, pursuing her first love, art. She attended the Provincial Institute of Technology and Art, the Banff School of Fine Arts and the Summer School of the Department of Education during evening and Summer Sessions, finally obtaining an Advanced Diploma in Fine Arts from the Alberta College of Art.

In 1944 she was offered an appointment at the Normal School "teaching teachers to teach". At the end of that academic year the three Provincial Normal Schools were taken over by the University of Alberta and Stadelbauer was appointed to the University staff as a lecturer on condition that she complete a university degree. Consequently, the goal which she set for herself as a grade six school girl was achieved in 1947 when she was granted an unpaid leave of absence from the University of Alberta, Calgary to attend Columbia University in order to obtain her Bachelors and Masters degrees in Art. Returning to Calgary "a confirmed New Yorker" in 1949, Stadelbauer determined to devote her energies to making the University of Calgary independent from the University of Alberta, and "to building an Art Department comparable to the larger Universities in the U.S.A." She remained at the University of Calgary for 31 years, being promoted to assistant professor in 1950, and associate professor in 1955, retiring as professor emeritus in 1976. Stadelbauer was the founding member of the Art Department which began as a division of the Faculty of Education. She served as its sole instructor for several years, taking an active role, as the department expanded, in the design of its facilities and the programs it offered. She served for several years as the department's administrative officer, and sat on numerous department, faculty and university committees, including the Senate. Stadelbauer's greatest professional interest, however, was teaching, and she devoted her energies to that and the improvement of the art programs at the University of Calgary, rather than on academic research and writing. Helen Stadelbauer died on April 6, 2006.

The fonds also contains a small number (3 grey boxes) of records belonging to Helen's sister, Isabel Stadelbauer. These records include personal and professional correspondence, as well as records of the Alberta Society of Artists, for whom Isabel acted as Secretary-Treasurer for several years.

Helen Stadelbauer's art work is held by the Glenbow Art Gallery and by The University of Calgary Archives.

A limited number of records of the Alberta Society of Artists are held by the University of Calgary Special Collections Department at MsC 242.