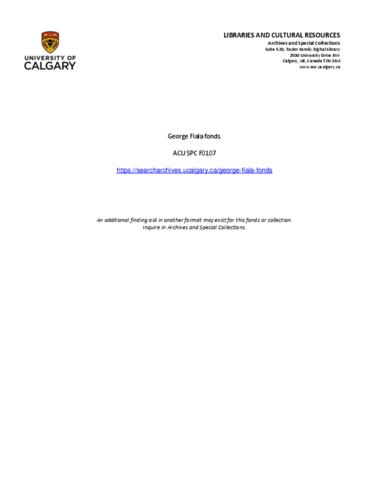 ca. 6.12 m of textual records and other material.

Fonds consists of correspondence; research and radio scripts for programs Canadian Music Journal and Jazz in Canada written by G. Fiala and broadcast on short wave by Radio Canada International's Russian Service (1960s-1980s); manuscripts of music sketches, scores and organ arrangements by G. Fiala as well as arrangements of works by other composers; manuscripts of essays on musical topics and of G. Fiala's autobiography; transcripts of interviews with various musicians, composers, conductors and others in the music field; sound recordings of musical works composed by G. Fiala and of some programs in the R.C.I. music series; photographs; diaries; scrapbook of reviews, concert programs and articles by G. Fiala; concert programs, newsclippings, articles and other publicity relating to performances of G. Fiala's compositions; and published works.