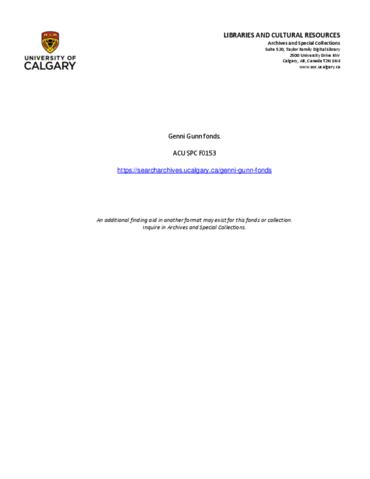 6.72 m of textual records and other material.

Genni Gunn was born Genni Donati in Trieste, Italy and moved to Canada in 1960 at 11-years-old. Having already started school in Italy, she grew up in Vancouver and studied at the University of British Columbia where she earned a B.F.A. (1982) and an M.F.A. (1984).

Before becoming a full-time writer, Gunn was a professional musician who did studio recording work and toured Canada with a variety of bands, playing bass guitar, piano and providing vocals.

Her published books include three novels -- Solitaria (nominated for the Giller Prize), Tracing Iris (adapted to film, The Riverbank), and Thrice Upon a Time (finalist for the Commonwealth Writers' Prize); three short story collections -- Permanent Tourists, Hungers, and On the Road; two poetry collections—Faceless and Mating in Captivity (finalist for the Gerald Lampert Award), and a collection of personal essays, TRACKS: Journeys in Time and Place.

She has taught creative writing for many years at Kwantlen University College in Vancouver and has been a visiting professor at Queens University, the Banff School of Arts, The University of British Columbia, the Island Mountain Arts School and many other locations.

Over the years Genni Gunn has been an active member of many writers’ organizations such as the Writers’ Union of Canada, PEN International and the Literary Translators Association of Canada. Her work has been nominated for a number of awards such as the CBC Literary Competition, The Commonwealth Prize, the John Glassco Translation Prize, the Diego Valeri Prize and others.

Fonds consists of correspondence; manuscripts of novels, poems, poetry collections, short stories, screenplays, opera libretto, music scores, translations, speeches, essays and proposal for an unwritten biography; material relating to conferences, writers festivals and workshops; works about G. Gunn and published works.
An accrual received in 2016 (Acc 2016.016) with a date range of 1983-2014, includes the complete drafts of novel Solitaria (boxes 1-5), and some drafts of other works including Tracing Iris, several short stories, Tracing Iris film script, reviews, correspondence with writers and editors, including Carolyn Swayze, correspondence with translators for Tracing Iris and Solitaria into other languages including Italian and Dutch, interviews given in magazines, records of workshops and conferences attended and papers given, records on awards adjudications, reading lists and reference materials.

Text in English and Italian.