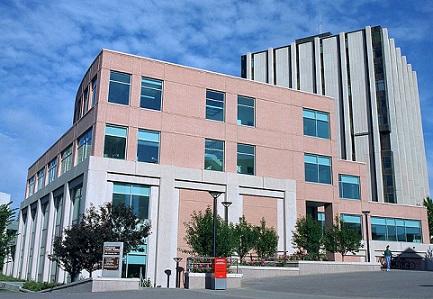 University of Calgary. Faculty of Law

The first Faculty of Law in Calgary was the Law School at Calgary College in 1913 which closed one year later due to the First World War. Law education was confined to the University of Alberta, Edmonton until the 1970s when interest in the establishment of a law school was indicated by the University of Calgary community and the members of the Calgary Bar. In 1973, the Government of Alberta appointed an ad hoc Committee on Legal Studies to investigate establishing a Law School in Calgary. The Minister of Advanced Education approved the Committee's findings in 1974 and the Faculty of Law officially opened at the University of Calgaryin 1976 under Dean John McLaren and Gail Starr, the Law Librarian.

The Canadian Institute of Resources Law was established on campus in October 1979. The Institute was the only body in Canada specializing in research, education and publication in all facets of resources law. The Institute was incorporated under federal legislation and functions with its own independent Board of Directors. The first Executive Director was Professor Rowland Harrison of the Faculty of Law. The object of the Institute is to contribute to a better understanding of how legal systems and laws deal with natural resources, to analyze whether such laws accomplish their policy objectives and to propose reforms for such laws. Early projects concentrated on the legal aspects of oil and gas but have since broadened out to examine legal issues concerning all natural resources. The Institute is funded in part by the Law Foundation.

In September 2010, the undergraduate degree designation changed from Bachelor of Laws (LLB) to Juris Doctor (JD).

Fonds consists of Director of Administration and Community Relations records including correspondence of the official opening and Tenth Anniversary, correspondence regarding the Martland and Fenerty Lecture series, reports from the Fund Development Committee and the Focus on Natural Resource Law Campaign (1975-1990), and records of the Dean of Law including minutes, reports and correspondence from the Council of Canadian Law Deans and the Faculty of Law Council (1975-1993). Also includes records from the Dean's Office, the Associate Dean's office and the Director of Administration including administrative material, curriculum, admissions and fund development committees, material regarding the history of the Faculty and records regarding the move to the Professional Faculties Building. Also consists of copies of "The Springing Use" (1976-1980), "Moot Hill" (1982-1989), annual reports of the Canadian Research Institute for Law and the Family (1988-1990), pamphlets and teaching materials (1977-1994), the Faculty of Law yearbook (1989), newsletters, videos documenting lectures, speeches, performances, and other events in the Faculty of Law, and records of the Special Committee on Pornography and Prostitution (Fraser Committee). Fonds includes series for News Briefs, Yearbooks, Newsletters, Pamphlets, and The Springing Use.