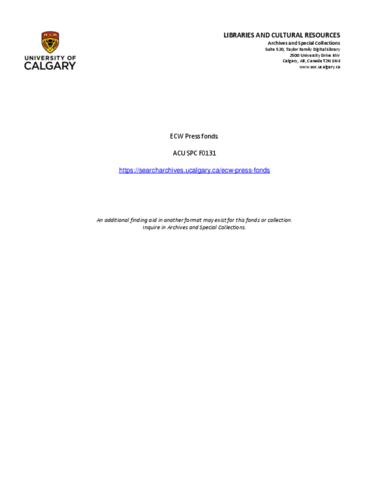 In 1974 Essays on Canadian Writing, a quarterly journal devoted to the study of Canadian writing, was first published by a group of Canadian literature graduate students at York University, Toronto, Ontario. The success of the journal led to the founding of ECW PRESS, dedicated to publishing Canadian fiction, Canadian literary criticism and reference works on Canadian literature, such as the two series The annotated bibliography of Canada's major authors and Canadian writers and their works. Jack David and Robert Lecker have been active as editors/publishers from the inception of ECW PRESS. Emerson House was a subsidiary publishing firm of ECW PRESS that published all types of fiction, non-fiction and poetry, and offered a variety of publishing programs to suit the needs of individual authors' particular manuscripts, and to help authors complete their projects quickly, professionally and economically. Additional information available in The Oxford companion to Canadian literature, 2nd ed., p. 350, and in Suzanne James's M.A. graduating essay for the Department of English, University of British Columbia, An analytical study of Essays on Canadian Writing (MsC 293.18.10).