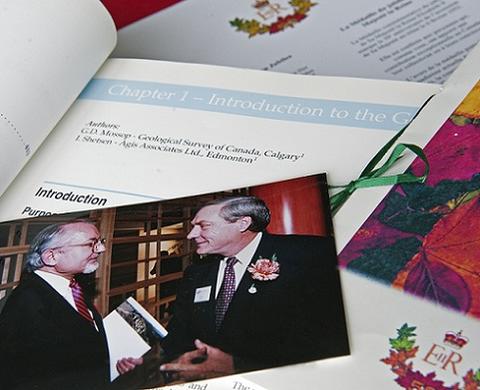 6.5 m of textual records and other material

Grant Dilworth Mossop was born in Calgary, Alberta on April 15, 1948 to Cyril and Freida Mossop. He attended Rideau Park Elementary/Junior High School and Western Canada High School, graduating in 1966. He was one of the first Honours B. Sc. Geology graduates of the University of Calgary in 1970, and went on a year later to earn his M.Sc. degree. Awarded the 1851 Commission Scholarship to study at Imperial College, University of London, he received his PhD degree in geology in 1973. After completing his PhD, he returned to the University of Calgary as a Post-Doctoral Fellow (Geology). His graduate and post-doctoral research dealt with Devonian carbonate rocks in the Alberta subsurface and with evaporate rocks in the Canadian Arctic and Europe.

In 1975, Dr. Mossop joined the Alberta Research Council in Edmonton, Alberta as a Research Officer. He became Manager of Oil Sands Geology Research in 1978 and was promoted to Head of the Alberta Geological Survey in 1980, a position he held until 1984, when he stood down in order to return to full-time research. During 1984-85, Dr. Mossop was an Academic Visitor at Oxford University. Upon his return in 1985, he resumed employment at the Alberta Research Council as a Senior Research Officer at the Alberta Geological Survey. In 1991, he joined the Geological Survey of Canada, Calgary office, as Director, Institute of Sedimentary and Petroleum Geology. He held this position for ten years, during a period of severe government cutbacks. He stepped down as Director in 2001, but continued to work with the Geological Survey of Canada as a Research Scientist and Chief Editor.

Dr. Mossop was one of Canada’s most widely recognized and respected sedimentary geologists. His most outstanding contribution to the fabric of Canadian geoscience was the compilation of the nature and origin of the sedimentary rocks of western Canada, the Geological Atlas of the Western Canada Sedimentary Basin, published in 1994. In addition to his work on the atlas, Dr. Mossop was actively involved in the geoscience profession in a number of different capacities. He authored over fifty scientific papers and made numerous presentations at conferences. He was an active member in several geoscience societies and boards, served as President of both the Geological Association of Canada (1986-1987), and the Canadian Geoscience Council (1989), and was a member/chair of numerous associated committees. He was an accomplished educator, and was an Adjunct Professor/Lecturer/Short Course Instructor at both the University of Alberta (1976-1986) and The University of Calgary (1978-2005). He was also an AAPG Distinguished Lecturer (1980-1981), and writer/presenter of BBC/ACCESS films on the geology of Western Canada (1987) and several other science programs for television.

Dr. Mossop received numerous awards and honours throughout his career, including the Link Award (1978) and the President’s Award (1995) from the Canadian Society of Petroleum Geologists, as well as the Ambrose Medal (1995) and the Distinguished Service Award (1997) from the Geological Association of Canada. In 1998, Dr. Mossop was presented with the University of Calgary Alumni Association’s “Distinguished Alumni Award”. In 2003, he received the National Managers’ Community Leadership Award from the Government of Canada. His commitment and extensive service to Canada were recognized by the award of the Commemorative Medal for the Golden Jubilee of Her Majesty Queen Elizabeth II in 2002.

Dr. Mossop was actively involved in community work throughout his life, including serving on boards of music societies and museums and being involved in local church administration. He was also an accomplished cellist. He toured with the National Youth Orchestra of Canada in 1965 and 1966, and played with the Calgary Philharmonic Orchestra for eight years. In 2002, Dr. Mossop was elected as a Senator to the University of Calgary Senate, where he served on a number of senior committees. He married Ruth in 1969 and they had three children: Jenny, Jonathan, and David. Dr. Mossop passed away suddenly from natural causes in October 2005.

The fonds consists of records created or collected by Dr. Mossop that relate to his professional education and leadership roles with the Alberta Research Council and Geological Survey of Canada, as well as his participation in numerous professional associations, his teaching career, and his involvement as a writer and on-air narrator in films and television programs. The fonds also includes records pertaining to Dr. Mossop’s family life, community involvement, and musical endeavours.

The fonds has been arranged into two series: Professional Practice and Activities; and – Personal Records.

Restrictions on access: University of Calgary exam files and keys are restricted until January 2016. The two journals created by Mossop while Director of the Geological Survey of Canada are restricted for twenty-five years.