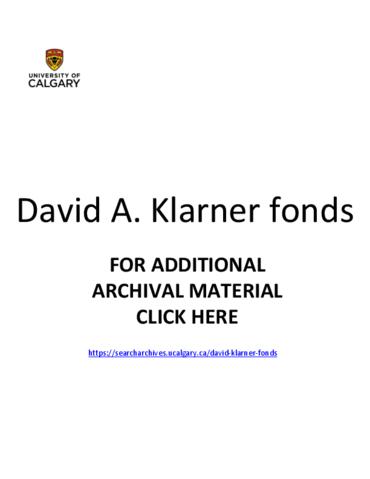 American mathematician, author and educator David A. Klarner was born October 10, 1940, in Fort Bragg, California, and spent his childhood in Napa. He knew he wanted to be a mathematician in grade school and attended Humboldt State College as an undergraduate. He obtained his M.A. and Ph.D. in mathematics from the University of Alberta in Edmonton, Alberta, Canada. He was then a post-doctoral fellow at McMaster University, Hamilton, Ontario; the Technological University in Eindhoven, The Netherlands; University of Reading, Reading, England; and a visiting professor of computer science at Stanford University. He was a professor at the State University of New York, Binghampton, and a visiting professor at the University of Waterloo, Waterloo, Ontario. He was distinguished visiting professor at Humboldt State College in 1979-1980 and spent sabbatical research years in The Netherlands in 1980-81 and 1991-92 and presented a lecture series at the University of Utrecht, Netherlands. He finished his career at the University of Nebraska, at Lincoln, where he was a professor of computer science for 15 years. He retired in 1996 to Eureka, California, where he died on March 20, 1999, of complications from diabetes. Dr. Klarner had a strong interest in discrete and recreational mathematics. He published a seminal article on polyominoes in the Journal of Combinatorial Theory in 1969 and continued to make important and original contributions to the literature of combinatorial enumeration, polyominoes and box-packing. He won many awards and fellowships and was published widely in various mathematical journals and books throughout his distinguished career. He was a good friend and frequent correspondent of Martin Gardner and edited The Mathematical Gardner containing contributions from many of the best mathematics popularizers of the last several decades of the twentieth century. Dr. Klarner was a member of the American Mathematical Society, Mathematical Association of America, Fibonacci Association and the Association of Computing Machinery.

Donated by Kara Lynn Klarner in 2010.

Collection is part of the Eugène Strens Recreational Mathematics Collection.