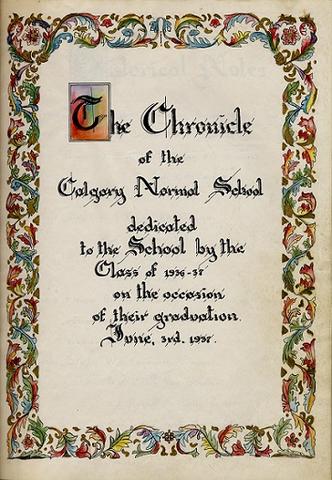 The Normal School, which offered a teacher-training programme, commenced classes in the Central School in Calgary in 1906, and moved to a new building at 6th Street W. and 4th Avenue in 1908. The School was renamed Calgary Normal School in 1913, and in 1922 it moved from the centre of the city to the third floor of the Provincial Institute of Technology and Arts' west wing. In 1939 the School was temporarily moved to the King Edward School but in 1946 it was moved back to the "Tech". In 1945 teacher-training schools in Alberta were integrated into the Faculty of Education of the University of Alberta in Edmonton. The Calgary Normal School became the Calgary Branch of the Faculty of Education of the University of Alberta and offered the first two years of a Bachelor of Education degree. George J. Bryan was the School's first principal and served from 1906 to 1909. Subsequent incumbents were W.H. Thompson (1909-1911); E.W. Coffin, Acting Principal (1911-1912); W.G. Carpenter (1912-?); Ernest W. Coffin (1936-1939); William Harper Swift (1940-1942); Gerald Manning (1943-1946); Dr. Clarence Sansom, Director (1946-1947); and A.L. Doucette, Director of Calgary Branch, (1947-1961).