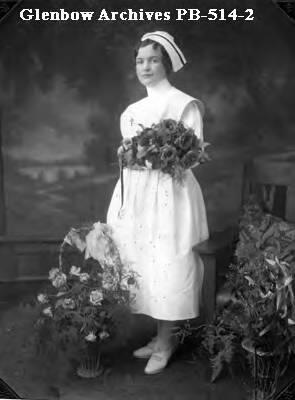 At the request of Bishop Vital Grandin, the Sisters of Charity (Grey Nuns of Montreal) established the Holy Cross Hospital in Calgary, Alberta in 1891. The School of Nursing was started in 1907 under the direction of Sister M. Fafard. Although run by a Catholic order, students of all denominations were accepted. The first class of five graduated in 1910, and by 1978 over 2000 nurses had graduated from the school. In 1969 the hospital and school were sold to the provincial government and came under the control of the Board of the Metro-Calgary and Rural General Hospital District No. 93. For further information see Nuns and Nightingales : A History of the Holy Cross School of Nursing, 1907-1979 / editor, Barbara Kwasny. -- Calgary : Alumnae Association of the Holy Cross School of Nursing, 1982.

The Holy Cross School of Nursing records held by Special Collections at the University of Calgary Library were transferred to Glenbow in 2017. The Calgary Regional Health Authority Archives holds other Holy Cross Hospital records. https://searcharchives.ucalgary.ca/e-m-benner-collection-of-notes-relating-to-training-of-nurses-at-holy-cross-school-of-nursing-and-other-miscellaneous-nursing-material