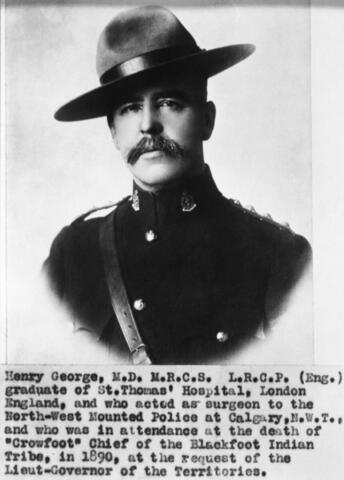 Henry George, 1864-1932, was born in Kirton-in-Lindsay, England and trained as a physician before coming to Calgary in 1889. He practiced with Dr. Neville Lindsay and was surgeon to "E" division of the North-West Mounted Police (NWMP), the Canadian Pacific Railway (CPR) and the Stoney, Blackfoot and Sarcee (Tsuut'ina). He moved to Innisfail, Alberta in 1893 and to Red Deer, Alberta in 1907. He was medical officer to the battalions stationed at Red Deer in First World War. He retired to Victoria, British Columbia in 1922.

The fonds consists of photographs of Alberta towns and the George family home in Calgary; microfilm of a scrapbook of articles about the George family and Innisfail; manuscript of Reminiscence (1924); Henriette's notes about nurses training at the Calgary General Hospital (1922-1925); correspondence and drafts of articles by E.S. George (1950-1960); and genealogical and biographical notes on Dr. George.

The original scrapbook is held by the Ernest S. George family.

The Red Deer and District Archives has the register book and a scrapbook for the George Museum, and copies of other family papers, the originals of which are held by various family members.

Records related to the Bernard family are located in the William Leigh Bernard fonds held by the Glenbow.