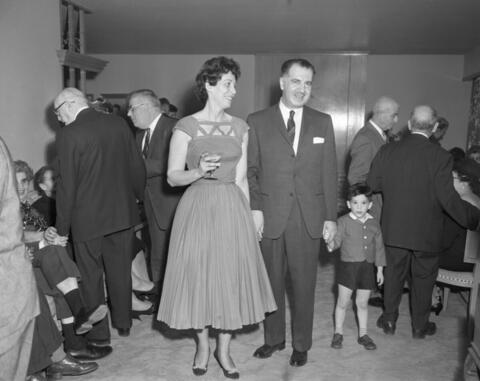 Harry Cohen, 1912-1990, was born and raised in Winnipeg. He left school early and worked as a theatre doorman and later as a film inspector. In 1932 he and his family moved to Calgary, Alberta where he was Warner Brother's film inspector and his brothers began a small retail business. In 1939 the brothers formed General Distributors of Canada Ltd., later the holding company for the Metropolitan and SAAN stores. Harry joined the new company, eventually becoming vice-president. The brothers also became the distributors of Sony products in Canada with Harry as vice-president. He married Martha Ruth Block, 1920-2015, in 1945 and they had four children, Philip Frank, Cheryl Beth, Faye Patricia, and David Irving. Martha was born and educated in Calgary and received a BA from the University of Calgary in 1940, and a Diploma of Social Work from the University of Toronto in 1945. Harry was active in many community organizations including the Calgary Foundation, Stampeder Football Club (director), Calgary B'nai Brith Lodge No. 816 (president), Calgary Chamber of Commerce (director), and Calgary Philharmonic Orchestra (director). He received an honorary doctorate from the University of Calgary, the Tree of Life Award from the State of Israel, and both he and Martha received the Order of Canada. Martha also received the Prime Minister's Medal from the State of Israel, was president of the National Council of Jewish Women in Canada and chairperson of Mount Royal College. In 1980 she formed the Calgary Centre for the Performing Arts Guild Association to raise funds toward the operation of the new centre, and she has been chairperson and president of the centre. The Martha Cohen Theatre was named in her honour.

Title based on contents and provenance of records.