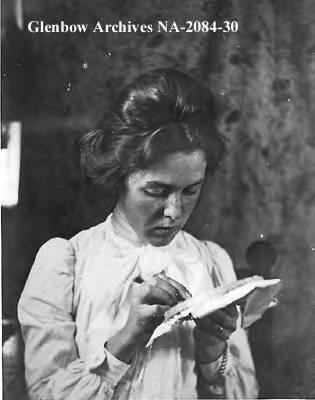 Gilbert Edwin Goddard, 1861-1931, was born in England. He travelled to California in 1881, and came to Canada in 1888 as bookkeeper at the Bow River Horse Ranch, a ranch occupying part of the former Cochrane Ranche near Calgary, Alberta. In 1891 Gilbert was appointed manager, and in 1893 he formed a partnership with E.H. and W.P. Warner, of England, and acquired control of the ranch. The ranch bred French Coach and Clydesdale horses to sell to the North-West Mounted Police (NWMP) and the English market. In 1900 Gilbert married Luella Grasse, 1882-1968 and they had four children, including Victor Llewlyn, 1900-?, and Gilbert George, 1901-1965. Luella's father, Peter Lewis Grasse, 1859-1940, was farm instructor at the Saddle Lake Indian reserve from 1888 to 1891, and at the Morley Indian reserve from 1891 to 1897. Luella was an accomplished horsewoman and with her husband showed pedigree horses. In 1918 the Goddards moved to Victoria and in 1925 they sold the ranch to Endre and Josef Csavossy. Gilbert later started Goddard Chemicals Ltd. in Washington, under the management of his son.

PC-90, originally part of this fonds, was given to Heritage Park.