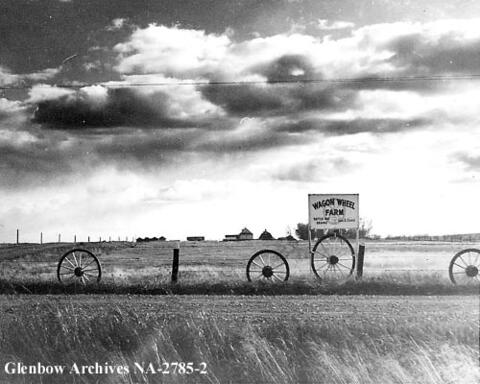 George Ernest Church, 1890-1961, was born in Ottawa, Ontario. In 1892 the family came to Alberta and homesteaded near Balzac. George was educated in Calgary and at Alberta College in Edmonton. In 1916 he married Jane Luella Rae, 1891-1964, who was originally from Nova Scotia. They had three daughters, Margaret (Reid), Lois (Rosenberger) and Mabel (Bancroft). George ran a mixed dairy farm called the Wagon Wheel at Balzac, and was noted for raising Percheron horses. He was very active in the United Farmers of Alberta (UFA), serving as district director and executive member before becoming president in 1945. In 1948 he became president of the newly created United Farmers of Alberta Cooperative Ltd., and remained in office until his death. In 1975 he was inducted into the Alberta Agriculture Hall of Fame.

The fonds consists of photographs (1912-1959) of Jane, the Balzac area, UFA and United Farm Women of Alberta (UFWA) directors and events, and visit of Queen Elizabeth; a recorded interview with Lois about her father and UFA (1973); and a memorial service program (1961).

No finding aid, but the photos have been digitized.